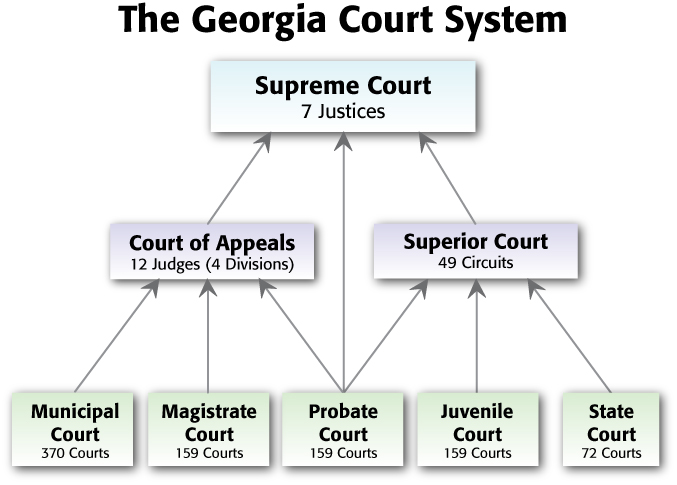 The criminal procedure is also different depending upon where you are in the legal process.  For instance, if you are indicted by a Grand Jury in a county court, you may skip several steps in an arrest. Check out the Judicial Council of Georgia for more information.

Superior Courts of Georgia are divided into 10 judicial districts and 49 judicial circuits.  They exercise jurisdiction over these types of cases:

These courts exercise jurisdiction over all misdemeanor violations and all civil action except in cases were the Superior Courts have exclusive jurisdiction.

Other Courts in Georgia

Process of an Arrest in Georgia

If you are stopped for a traffic stop for speeding or a Dui in Atlanta by a municipal police officer your case will begin in the Atlanta Municipal Court.  If you lose in Municipal Court, you have a Right to Appeal to the Court of Appeals.

When arrested for a felony charge by a County Sheriff or State Trooper, you will be charged in Magistrate Court for the county, such as Cobb, Dekalb or Fulton.

Once indicted for a felony, you will likely face an initial appearance, maybe a bond hearing, and multiple other court appearances such as arraignments, evidentiary hearings, various motion hearings, scheduling hearings, pre-trial, jury-selection, trial, and then post-conviction motions, appeals to the Court of Appeal and/or then to the Supreme Court.

Your attorney may file many motions, motions for speedy trials, motions to exclude evidence as illegally obtained under the 4th Amendment, discovery motions (to obtain evidence against you held by the State), and more.

If you are being investigated for a crime you need a lawyer.  If you have been charged with a crime you need a lawyer even more.  You not only need a lawyer, but you will also need an experienced Georgia criminal and traffic law attorney. I have represented clients charged with crimes in Georgia in all criminal and municipal courts for decades.  I am familiar with the police, the prosecutors, and judges in the Atlanta area and throughout Georgia.  We often can have charges immediately reduced or even dismissed.  If you need help, please reach out for a free consultation.   I can help you fight these charges and mitigate possible repercussions. I can help you protect your Rights, freedom, reputation, finances, and more.  Please check out my client reviews and testimonials here.  I, attorney Tom Nagel, am your Fulton, Gwinnett, Cobb & Dekalb County criminal Lawyer. Please call me anytime, 24/7 to discuss your case in a private and confidential detailed examination of your criminal matter.  I will walk you through the criminal process and the Georgia Criminal System the entire time. I have won awards for criminal defense and named a preeminent lawyer by my peers in Martindale Hubble.  I have represented thousands of clients in all kinds of criminal cases including:

Please read my blog on Georgia Criminal and Traffic Law .  I regularly update my blog regarding criminal defense and criminal procedure.  Here is a recent article discussing the new Second Chance Law in Georgia that began on January 1, 2021 in more detail.

“Injustice anywhere is a threat to justice everywhere. We are caught in an inescapable network of mutuality, tied in a single garment of destiny. Whatever affects one directly, affects all indirectly.”